Before European settlers crossed west of the Mississippi River, prairie covered the continent from what is now Montana to Indiana and Canada to Texas. The prairie, a mostly treeless ecosystem characterized by grasses, forbs and rich soil, depended on annual fire, grazing bison, and moderate rainfall for maintenance. As settlers moved into the region and pushed out indigenous groups, the prairie began to shrink as European immigrants over-hunted bison and began to turn the prairie into farm fields. This systematic destruction of the prairie has continued to this day, to the point where, throughout the prairie region, very little of the original prairie remains. In many cases, it is less than one percent.

I wanted to show the loss of the prairie ecosystem through the old practical art form of quilting. The art was brought to North America by European settlers who then introduced the art to Native Americans, and many quilts from the last 300 years have featured or been inspired by the prairie.

To visualize prairie loss, I enlisted the help of Montana-based photographer Chris McGowan and Minnesotan photographer and videographer Graeme Thompson. McGowan and Thompson shot photographs of the prairie in Montana and South Dakota, respectively. I ran their photographs through a web program that broke them down into a select number of the colors that make up each image, and determined how much of the image is composed of a certain color. I then created a visualization of the web program results and began sewing the quilt.

As you look at the quilt and following photographs, consider what the Midwest would look like if it were still covered in tallgrass and shortgrass prairie.

Chris McGowan is a freelance photographer and instructor based out of Helena, Montana. Chris’s passion for photography stems from his deep love of nature and the outdoors. Primarily a wildlife and nature photographer, Chris travels Montana capturing images of wildlife as well as the state’s vast and ever-changing landscape.

Graeme Thompson is an amateur photographer and videographer from the Twin Cities who recently has been exploring long exposure timelapses of the western landscape. He hopes to continue his work with the goal of becoming a cinematographer. 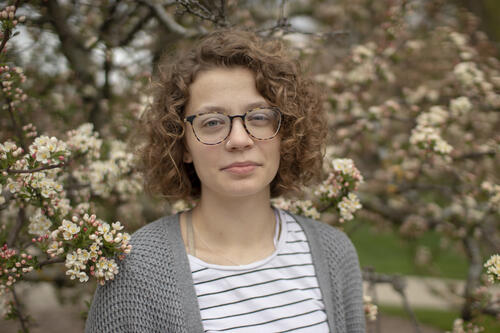 Winnie Commers is a third-year student at Grinnell College majoring in biology. She learned to sew as a young child and enjoys seeing what she can make with her sewing machine. In addition to sewing, Winnie dabbles in other textile arts and photography