I have had my second injection of the Moderna vaccine and, as of two days ago, I’m 90 percent immune to the coronavirus. As I write this, outside my window spring is on its way, and I should be feeling hopeful rather than melancholy. But after a year that has provided as much storm and stress as 2020, maybe the way I’m feeling is understandable.

I’m not quite old enough to have experienced the McCarthy era first-hand, but I’ve experienced its reverberating shock-waves all my life. I did live through the turmoil of the 60s, and I have a very vivid memory, as an elementary schooler, of those days, beginning in song and demonstration, ending in rage and revolution. I remember feeling afraid that the peaceful and idyllic world of my rural Midwestern childhood would be neither peaceful nor idyllic when I grew up.

In the event, I was both right and wrong. Successive waves of change—social, economic, technological and political—have swept over America and the world during the last three-quarters of a century. Some of these changes have been positive, some negative and some equivocal. All have occasioned turmoil. On the positive side, there has been a wholesale reconsideration of gender-roles and sexuality during my lifetime. Technology has sped the flow of information, and made such enterprises as Rootstalk possible. Human responsibility for the erosion of the natural world became a commonplace of public discourse and the EPA was established, with its administrator being given a seat at the President’s cabinet.

On the negative side, America fought its first losing war, and the unrest attendant upon it overshadowed the reforms LBJ had hoped for with his Great Society. The nation resolved to go to the moon, and at last began to address its legacy of systemic racism, only to abandon both efforts at their respective high points. During the last 40 years or so, the rich have gotten much richer on the backs of the middle class and the poor. And during the last Administration, the fault lines in our nation’s polity grew more and more pronounced, resulting at last in the rage-quake that shook Capitol Hill on January 6th.

It may sound strange if I say that this meditation on American loss has been triggered by a small butterfly, but it has. In researching the “Endangered Animals of the Prairie” feature for this issue, I did some reading on the Poweshiek skipperling (p. 54), including an essay by Rootstalk’s Publisher, Jon Andelson. I learned that this diminutive insect—named for Iowa’s Poweshiek County, where the journal and its Grinnell College home are located—was first described to science in 1873 by Henry Webster Parker, a 48-year-old professor of chemistry and natural history at the College. The Poweshiek skipperling has long since disappeared from these environs, wiped out by the wave of prairie conversion which so thoroughly extirpated the native flora—and, consequently, much of Iowa’s native fauna—that only a tenth of a percent of the original tallgrass biome remains. 1 This spelled doom for the Poweshiek skipperling which, as I learned, can only survive on prairie which has never been cultivated. Now the species can only be found in isolated pockets in Michigan and Manitoba.

Why, some might ask, should we care about that? It’s just one species of butterfly, after all, and according to the Smithsonian institution, there are over 17,500 species of butterflies in the world, 750 in the U.S. alone. 2 My plaint doesn’t arise from morbid over-sensitivity, though. It arises—appropriately enough—from my understanding of the butterfly effect. This is the well-known concept, closely associated with the work of mathematician and meteorologist Edward Lorenz, which holds that the formation and path of a tornado can be influenced by perturbations in the environment as tiny as the flap of a distant butterfly’s wings. I wonder: what changes might have been occasioned here by the absence of the Poweshiek skipperling’s delicate movements?

Not all injustices are heralded by a demagogue like Joseph McCarthy, standing up before the Senate with a fictitious list of names in his hand, or the bluster of a president, insisting against easily accessible facts that an election has been stolen from him. Diminutive losses can accumulate, with small losses adding to and worsening larger ones. This matters in all of the many worlds we occupy—political, environmental, social, personal. What begins as seemingly innocuous language in the text of a bill, the decision that recycling is too much trouble, or a micro-aggression in a classroom or restaurant, ends by contributing to injustice, environmental degradation and fury on the other side of the country, or the other side of the world.

This evening my teenaged daughter, out for a walk with the dog, came across a Luna moth, resting in the middle of the sidewalk. It was newly emerged from its chrysalis, its wings still crumpled, in the midst of drying. It was strange and gratuitously lovely, in the way wild things can be. She took out her phone and took pictures, and when she came back to the house and showed them to her mom and me, there was wonder in her voice. She will never have the experience, though, that Professor Parker had—of stepping out her front door and observing the Poweshiek skipperling, something rare and intrinsic to our patch of the prairie, and of bringing it to the attention of the world for the first time.

The birth of a moth; the absence of a small butterfly. These might seem like small things, and a moment’s inattention could allow them to slip past us unremarked. But if we don’t attend to small things like these then the loss of large things may creep up and catch us by surprise. 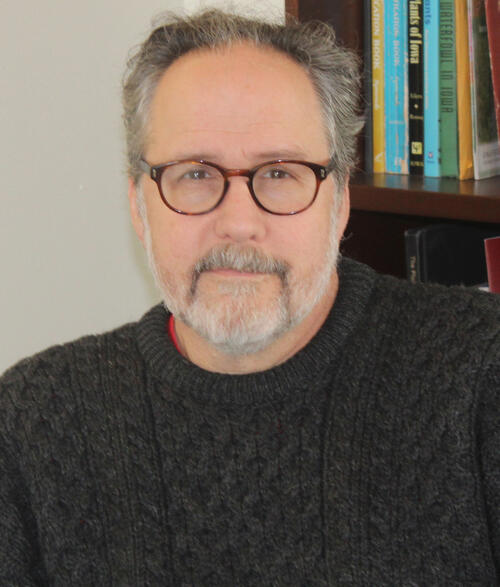 Mark Baechtel received his B.A. in print journalism from The American University in Washington, DC, and his M.F.A. in fiction-writing from the Iowa Writers’ Workshop, where he was selected as an Iowa Arts Fellow. He has nearly 40 years of publishing experience, and is author of Shaping the Story, a textbook guide to short-story writing (Longman, 2003). He has taught at the University of Iowa, Grinnell College and various art centers, as well as working as a professional book editor. His work has appeared in numerous newspapers, magazines, journals and anthologies, nationally and internationally. He is currently polishing the stories in a collection of short fiction, titled What Moves and What Is Still, and is at work on a novel titled Renovation.