— A Handbook for Rural Renewal by Robert Wolf

When men are merely submerged in a mass of impersonal human beings pushed around by automatic forces, they lose their true humanity, their integrity, their ability to love, their capacity for self-determination.

Merton’s powerful epigraph serves as a compelling opening salvo, one that Robert Wolf himself sounds with this creative and timely book, <em>Building the Agricultural City: A Handbook for Rural Renewal</em> . Following in Merton’s footsteps, Wolf provides us with an alternative vision of rural America that, to many of us, may seem an impossible fiction in light of what writer and critic Wendell Berry decried as the “unsettling of America.” This “unsettling” is a process, centuries in the making, that has reverberated across our rural communities, contributing to a sense of divisiveness between rural and urban locales. It may cause most of us—especially those living in rural areas—to believe that any alternative, positive future for rural America, like the one Wolf envisions, simply defies reality.

Nevertheless, in this inspiring book, Wolf provides us with a practical scenario for how we could actually experience a rural renewal grounded in the evolution of a new paradigm. As Wolf points out, we now need to begin building regional, alternative “arks” that envision alternative rural futures in which rural and urban communities are no longer separated, but become part of a bioregion, wherein rural and urban citizens work together to produce new communities that are driven by self-renewing regional capacities, in lieu of the current dominating and centralized globalist economies. As Wolf says:

Regionalism is precisely the means by which we can reconstruct society with a human face—if we have the collective will to do it. Regionalism is a form of decentralization, and is at odds with our overly centralized system, which seeks to impose uniformity in every sphere of activity (page 38).

Those who think such a future is unrealistic may want to also consult a new book by John Thackara, <em>How to Thrive in the Next Economy: Designing Tomorrow&rsquo;s World Today</em> , in which he points out, based on his travels around the world, that such rural/urban bio-regionalisms are, in fact, already happening in many parts of the world.

Of course, communities across the U.S. have been heavily influenced by the culture of the Green Revolution, which envisioned, and created, a food system designed to feed the world with cheap food produced by fewer farmers, thereby producing an industrial, input-intensive food system designed for “maximum, efficient, production, for short-term economic return.” The Green Revolution’s proponents claim that bio-regional transformations are untenable. Viewed from this perspective, the industrial farming-and-food paradigm embodied in the Green Revolution seems inevitable, and many believe that science and technology will insure its resilience, and its economic efficiency ought to be enough to ensure its attractiveness. Wolf views this paradigm as a limit on our imagination, as it leads us to believe that the current order of things is simply the way things will always be. As Wolf says:

Clearly, achieving greater self-sufficiency is not simply a technical problem. More than anything, it is a social problem. Many people here [in the Driftless Region of NW Illinois, SW Wisconsin, and NE Iowa], as elsewhere in America, believe that our centralized system is a reality of nature, like the Atlantic Ocean or the Adirondacks (page 31).

Wolf provides us with a different scenario, pointing out some of the many reasons why the industrial food system is already beginning to “approach collapse” and is likely to include “chaos and violence” when it collapses. It is imperative, he argues, that we explore an alternative food system and begin building it.

Of course, one of the many drivers of the Green Revolution model—as well as our enthusiasm surrounding it—was our collective assumption that the natural capital would always be there, throughout our industrial economy—and that new technologies would constantly be developed to replace it. Components of this natural capital would be healthy soil, cheap minerals, plentiful fossil fuels, and abundant fresh water—all essential to the “success” of our Green Revolution food system.

Now we are beginning to recognize that many aspects of this natural capital are in a state of depletion. As Wolf notes early in the book, “one of the distinguishing features of contemporary American civilization is the frequency of breakdowns and failures in industry, government, and society itself. The size of the problem is enormous.”

Take, for example, minerals. Rock phosphate—which is the “natural capital” from which we manufacture our phosphorus inputs—is now depleted to a point where we only have perhaps another ten year’s-worth of supply remaining on the planet. Or soil. Since we have paid little attention to restoring the health of our soils in our input-intensive systems, we need large quantities of fresh water for irrigation. This is due to the fact that most of our soils now only absorb about a half an inch of rain water per hour, so we now use approximately 70 percent of our freshwater resources on the planet for agricultural irrigation. All of this, of course, is beginning to increase costs and produce diminishing returns—especially for farmers. In his recent book, <em>Growing a Revolution: Bringing Our Soil Back to Life</em> , David Montgomery provides concrete evidence of how some farmers are already beginning to alter their farming systems because the input-intensive systems simply no longer produce positive economic returns for them. Instead of continuing to rely on external inputs, which are becoming more costly, they are beginning to employ practices that restore the natural capital, reducing the need for the inputs. These farmers are now reducing their costs, increasing their net profits, and are no longer interested in “getting bigger.”

This begins to make clear why the revolution Robert Wolf envisions is a practical necessity. Even if we only consider cheap energy, minerals, soil and water as part of the natural capital that has “sustained” our industrial agriculture for the past century, we must recognize that they are all in a state of depletion. As Wolf duly noted throughout his treatise, our industrial economy will, at best, only survive for another two or three decades:

The centralization of American government, finance, and industry has grown extreme, to the extent that it governs our life and work. Such a system cannot long endure, and our various environmental and social breakdowns are evidence of an ongoing crisis… Our institutions and corporations have grown too large: everything exceeds human scale and has become inhuman. It is imperative that we construct political and economic units in which people can once again find a home (page 23).

This search for a home, for the reconstruction of our self-reliance, is the compelling reason that Wolf’s vision for the renewal of rural America, beginning with arks of refuge from industrial capitalism in places like the Driftless Region of the Upper Midwest, may seem strange to those of us still locked into the culture of the industrial economy. Wolf, looking back in our collective history, demonstrates how “early American history is replete with examples of local and regional self-reliance, from the Spanish Southwest to Yankee New England, from Chesapeake Bay to the Carolinas and Georgia.” Returning to that kind of regional self-reliance can play a central role in deconstructing the highly problematic political economy in which we live.

Those still not convinced may want to examine yet another recent publication by two of our leading agroecologists, Peter Rosset and Miguel Altieri: <em>Agroecology: Science and Politics</em> . Rosset and Altieri highlight the key fact that the majority of food that feeds the global population in today’s world is being produced by smallholder farmers farming five acres or less! Going further, Rosset and Altieri point out that those smallholder farmers are already employing, and have been for millennia, the very kind of agro-ecological farming practices—grounded in “local autonomy, local markets and community action”—that Wolf envisions for a future America. Finally, it is also important to recognize that these “agro-ecological” farming practices, which Rosset and Altieri describe, are operating as “human-centered cultures” driven by community relationships, not by machine-like alternative perimeter cultures that humans have to conform to—exactly the kind of human-centered culture that Wolf envisions for the Driftless region and eventually America’s future.

Finally, as we anticipate these future changes, Wolf suggests we embrace not more technology, but more imagination. Therefore, the arts can play a critical role in helping us to envision and adapt to this new future:

From my perspective, Wolf’s book is filled with important information—information that is vital for all of us to digest as we anticipate the changes coming at us, so that we can get an advanced start in preparing for them. Furthermore, by beginning to construct a few “arks” here and there, it becomes possible to demonstrate that the kind of human-centered, agro-ecological community farming which is already “feeding much of the world” could thrive in America. Doesn’t that seem like a good way to start this transformation? 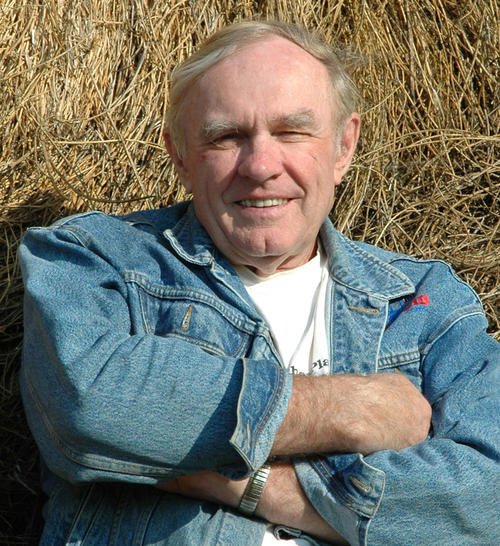 Frederick L. Kirschenmann shares an appointment as Distinguished Fellow for the Leopold Center and as President of Stone Barns Center for Food and Agriculture in Pocantico Hills, New York. He served as the Leopold Center’s second director from July 2000 to November 2005 and has been recognized widely for his work. He also continues to manage his family’s 1,800-acre certified organic farm in south central North Dakota, where he developed a diverse crop rotation that has enabled him to farm productively without synthetic inputs (fertilizers or pesticides) while simultaneously improving the health of the soil. His farm has been featured in numerous publications including National Geographic, Business Week, Audubon, the Los Angeles Times and Gourmet magazine.