For the past decade my artwork and research has focused on ‘edgelands,’ from a forest in Massachusetts bordering a subdivision to a ragged prairie in Minnesota running along a railyard. Edgelands act like scrims rendering other spaces invisible, yet the edgelands are absent from most city maps. This wavering visibility seeps into my photographs and drawings: the soft villous hairs on the unfurling fern fronds are partially obscured by a puddle of green paint. Edgelands are considered one of the last refuges of wildness. I photograph and draw the plants I discover in these overgrown patches of “weeds” as the seasons change. My images are as much about making visible this overlooked landscape as they are about documenting the passage of time.

“The Prairie Constructs” are an ongoing series which catalogs the life and death of plants from the edgelands of Minneapolis. Made almost entirely on the scanner bed, The Prairie Constructs are a digital version of a photogram or botanical solar print. The images are shown as both large-scale digital color prints and as an artist book or compendium, showing the evolution in the landscape over the course of a year. What started as a way of collecting bits and pieces of plants as the seasons change has turned into a methodical and sometimes frenetic project of gathering and experimenting with each plant.

Since I often uncover synthetic materials, plastic bags mostly, as I collect plants I included these in the images as well.

Chance also plays an important role because the view from below of the scanner is not visible until the image appears on my screen. I place my materials within the frame and then document them as they react and evolve (melt, flow, crumple, wilt), often making multiple scans from a single combination of paint, photographs, plants and plastics. I orchestrate this “organic process” that is then recorded and amplified through digital technology.

Light is an important ingredient in the transformation of my materials and in the elevation of these spaces. I work with light when photographing the landscape, making the scans and installing the images. In traditional landscape painting, light can be interpreted as lumen, observed light, or lux, divine light or the light of reason. I prefer to think about light in terms of Heidegger’s description of lichtung, which translates as “light in a forest clearing.” He argues that openness must precede lumen and lux, observation and judgment. My work enables me to be open to the natural world that is around me, even in the city. It is this sense of wonder and awareness about the persistence of urban nature that I want to pass on to viewers through my images. 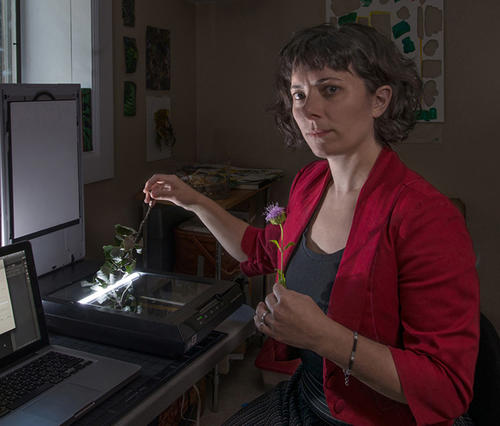 Regan Golden depicts ecological change in the American landscape using drawing materials and altered photographs. Golden’s images have been exhibited in solo and group shows both nationally and internationally, including Harvard University’s Fisher Forestry Museum, The Cue Art Foundation in New York City and the Museum of Contemporary Photography in Chicago. Recently, Golden has exhibited works from her series, “The Prairie Constructs,” which comprises over 140 mixed-media images which draw heavily on the Tallgrass Midwest for inspiration. Golden has exhibited works from the series at Soo Visual Art Center in Minneapolis, Residuals at the Architecture Library of the University of Minnesota and Unearth at the Painting Center in New York City. We have chosen a number of images from the series to feature in this issue of Rootstalk. Golden has received numerous grants and fellowships including The Core Program Fellowship in Critical Studies at the Museum of Fine Arts Houston, The Jerome Foundation Emerging Artist Fellowship, The Minnesota State Arts Board Artist Initiative Grant, and a Long-term Ecological Research Grant in the Arts from The National Science Foundation. In 2016-2017, Golden was the first Artist-in-Residence at the College of Biological Sciences Conservatory at the University of Minnesota, a home for rare and endangered plants from around the world. Golden is currently a Lecturer in Drawing, Painting, and Critical Studies at the University of Minnesota and the Minneapolis College of Art and Design. Golden has written about her work in general and “The Prairie Constructs” in particular in the above artist’s statement.