A Child’s First Taste of Freedom

It was Halloween eve—or Beggars’ Night, to all of the little kids of the time—in my small Iowa town. It was a beautiful and warm autumn day. The sun was shining, still high in the sky, leaves were on the ground and though the grass had lost some of its beautiful green luster, it seemed to us as if the summer of 1978 was still going strong. We lived in an older neighborhood. A little one-block street that continued on the other side of the tracks and was bordered by the cemetery. A mix of ranch homes and two-stories; most of them older and in various states of age. A very quiet street that you didn’t turn down unless you lived on it.

On this day, as on so many others during my youth, Penny, my older sister, was my companion. We were going to go trick-or-treating, and we were teaming up with our cousins and rural country counterparts : Jimmy and Donnie. Jimmy and I are the same age, though I am the youngest of three siblings and Jimmy is the oldest of three siblings. Jimmy and I often played together in our early childhoods, and we attended our first day of kindergarten together. I’m sure the four of us were an interesting sight: two blonde-haired blue-eyed boys and two brown-haired blue-eyed girls.

I have no idea what our Halloween costumes were that year. As was true with most children in our small modest neighborhood, most often our costumes were homemade. My guess would be that we were a clown, or a hobo, or a politically incorrect Indian. All I know for sure is that our instructions were to stay together and be home by dark.

It took a community to keep kids safe back in the day. Everybody was so much more cohesive, or aware of our little world. We certainly followed instructions that evening, and stayed together, because little kids are primarily pack animals. I don’t think there was a lot of planning; clearly, we knew where the best candy was in town. We all knew where to go. It just comes from growing up in your neighborhood, just learning and being aware.

Can you imagine? There was no “don’t talk to strangers,” no “hold hands;” no cell phones, no hovering parents. We were free. I think that stays fresh in any person’s mind: the first time they get to venture out on their own. I’m sure every child can remember their first outing without their parent, and the sense of freedom that came with it. I can remember that it was just very exciting; something that has remained stamped in my mind: my first opportunity to act like a young adult. Our parents were trusting us to take care of ourselves.

I still live in this picture-perfect little town, where I run the Saints Rest coffee shop, and today, I have kids that walk to the coffee shop for the first time by themselves. Because I know the kid, I can ask their parents a week later, and they will be like, “Oh yeah, that was their first outing.” You know, if you’re that kid, you remember that. I don’t know how you wouldn’t remember that.

I just talked to someone recently who said, “You have a very charming town,” though—if you’ve grown up here your whole life—I don’t think you necessarily see that. The picture is a bit more complicated than it seems to be on the surface—a fact that’s made clear by a recent movie, “Saints Rest.” The movie was made by an alumnus of the College here; it’s centered on my coffee shop, and it brings the sense of complication to the forefront. This is just a small town—kind of sheltered, which is why there’s a false feeling of safety. I’d say we’re slower, not only in pace, but just behind the times. Back then—I can tell you—my family was so far behind. I remember getting television when everyone already had it.

So, anyway, there we were on the western-most street of town, running full-speed away from our little neighborhood, pillow cases in hand and gleeful determination on our faces.

We didn’t do anything naughty; naughty was five years off, when I’d TP houses, and do other nasty, naughty things. That night, we were really focused on candy. Who has time to dilly-dally when candy is all you really want? No, that night, as we ran down the street, it was candy, candy, candy.

First, we headed north to the “rich” neighborhoods. Big fancy houses with beautifully manicured yards, nice sidewalks and porch lights that beckoned to us. These houses always had the best candy, sometimes even full-size bars! Not an apple in sight.

There was only one guy that I can remember who decorated his house. His name was Jim Haines. He did a cemetery in his front yard, with smoke, and lights, and he dressed up—I want to say he was a werewolf, or something—he scared the crap out of us. We ran, screaming, and I don’t think I got any candy. Decorating back then clearly wasn’t as dominant as it is now. Not even close. I don’t have any memories of that; I barely have memories of Christmas lights, as a kid.

Anyway, after heading north, we would head east, then south and then back home. Funny that I don’t remember coming home that night. I simply remember the leaving. But I do remember our pillow cases getting heavy. I remember a few bits and pieces; but nothing as clear to me as running away from our house and into the beautiful unknown. 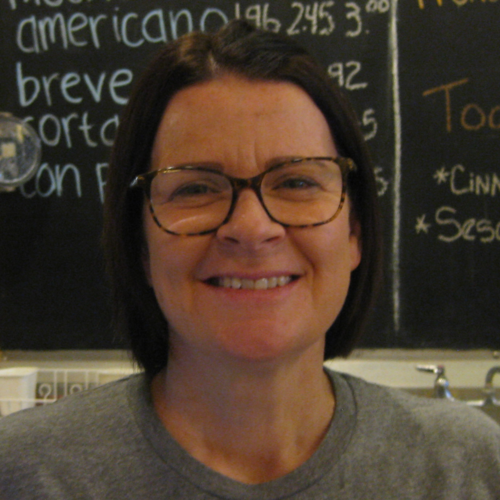 Sam Cox is the proprietor of the Saints Rest Coffee House, one of the fixtures of daily life in Grinnell, Iowa. An Iowa transplant at a very young age, she was raised in Grinnell and graduated from Grinnell High School. She attended college and returned to Grinnell to raise a family. About the town, she says: “I love this community and all of its colors! It has more depth than people may see and what a great place to raise a family. So here I am.”