The Hottest Car in Town

Hotrods. The pastime of cruising your pride and joy down Main Street, racing to impress the hometown crowd, is a lost art of a long gone era in Grinnell, Iowa.

I lived in the country and graduated from the eighth grade at Ewart School. I then moved to Grinnell with my folks. A second-hand bicycle was the incentive to attend high school. Before I ever got my license, I drove with my parents to “Seven Mile Corner,” and a patrolman came along and stopped us. He said I was a good driver, but I was too short and, of course, had no license. He gave me a five dollar fine, which my father paid. In 1945, five dollars was quite a bit of money! When I finally got my license, I was restricted to sitting on a pillow when I drove.

During high school, I bought a motorbike, which would reach upwards of 50 mph, but I didn’t get my first “hot car” until I graduated in 1948: a 1932 Model B Ford, black. I had to pay for the car myself. Once outta’ high school, I worked at Central Meat Market for $30 a week cutting meat, and that’s how I paid for it. The Ford had a V8 engine and spare wheels in each of the front fenders. At that time it was one of the fastest cars in Grinnell, and I thought it was real cool.

Back then everybody would be downtown, just messing around. The girls would walk the block and the boys would “scoop the loop,” driving real slow to show off their cars. We used to race anyone we could those nights. This was after people got done with work, because, you see, everybody worked back then. You’d see somebody, pull up beside them and then ask if they’d wanna race. Chances were the other guy would be driving the other way, and you’d just stop in the middle of the road and decide where you’d race to. Then, you’d go out to the edge of town, line up and take off, ending at Seven Mile Corner on the other edge of town. The Seven Mile Corner was the intersection of Highway 63 to Tama and Route Six to Malcom, a local landmark. The girls were young and silly and they’d always be two or three together. You’d always have buddies in the car with you. It was never a one-on-one thing. My friends would be rooting for me in the back of the car. We lost very few races in town.

I think we only had around three or four police then. The chief at the time was Glen Bell. I knew two of the local police pretty well. They drove Pontiacs and always rode two in a car around town. Once in a while they would even play “ditchum” with us, with them “chasing” us around, but more often than not, we would end up “losing” them. Caution, do not try this at home kids! One officer lived two blocks down from me: he seemed big and intimidating back then. But he was about as close to being a buddy and as friendly as you could get, at least for a police officer. He knew what I did with my car. One time he caught me as I was racing my friend Jerry from this little hamburger joint, over where Lincoln Bank is now, and up Sixth Avenue. He caught me right about where the new library is. Jerry’s dad had just got a new Oldsmobile. And the cop teased, “You’ve got a pretty poor car to be racing that new Oldsmobile,” and I said, “Well, I bet I could take you!” And so we raced out to Seven Mile Corner. They couldn’t go all the way out of town, but they’d go out at least three-quarters of a mile out of town to Lang’s Dairy. Oh, I beat them a coupla times. The officer wouldn’t really say anything when I’d win. Makes sense, since if word got out they were racin’, they’d probably be in big trouble. All he knew was that I had the hottest car in town.

Unfortunately, “the hottest car in town” eventually came to an end. The car was light in the rear-end, which made it possible to slide it around corners fast without upsetting; however, the car had one big drawback: it was very hard on transmissions. You had to replace the transmissions at least half a dozen times, so it got to be almost second nature. Transmissions cost five dollars. That was a lot of money for back then, as I’ve already said. You’d have to go to the junkyard to get a replacement. It had to be a Ford transmission. Fortunately, the local junkyard kept me in good supply. A friend and I could change one out in two to three hours.

Old Sam Berman ran the junkyard. I knew him real well, and he’d chatter like a chipmunk, but he knew what I wanted when I came. He didn’t give me no discount; just wanted his five dollars. He’d have probably let me have it on credit, though, if I asked. The junkyard used to be over where the Fareway food store is now, near a warehouse for Meadow Gold ice cream, where they loaded into and out of trucks. The junkyard would buy old cars, iron and metal scraps, even animal hides. Back then they moved it all by hand or with trucks; now they’ve got big cranes.

After two years the front frame finally broke, and I had to junk my beloved car out. The body ended up in my brother-in-laws hog lot! Truly a sorry end to my first car.

However, I didn’t lose my love for speed and danger as I raced a stock car, over at the Newton [Iowa]race track for two seasons.

Back in the day, we’d race out in Newton where they had a fifth-of-a-mile track. I raced my friend’s Chevy for him. It cost money to enter. They had prize money, and they charged people to come and watch. It used to be a pretty big deal; over a hundred people would be in the bleachers on every Saturday night. We’d work on it all day Saturday and then that night go and race. We’d fixed it back up again Sunday so it’d run. Eddie Anderson, who had a body shop in Grinnell, even raced in big time races like the one at the State Fair, with actual race cars. I never did win much, and I even rolled my car once, but it was a lotta fun back then and a lotta folks did it.

My mom took my car to go visit a friend once. Since those ‘hot cars’ had manual brakes, you had to use your head and know what’s ahead of you. It didn’t have no hydraulic pressure, so it was almost as good as just dragging your foot to stop. You’d burn rubber taking off, but you couldn’t really stop it. Well, she backed out of the driveway, and before she knew it she was halfway across the railroad tracks! She never asked to borrow my car again after that. The engine was also pretty loud. You’d take the muffler off and stick a straight pipe on it, but the cops didn’t like that—kinda like my pickup sounds now—I always talk about fixing it, but my wife likes the sound.

My grandson used to pull up beside us sometimes in town and we’d race as best we could. I didn’t lose many of those either, even when I was racing him with my pickup. Fortunately, I don’t get it by the police at all now. Don’t think they ever got any trouble with me. 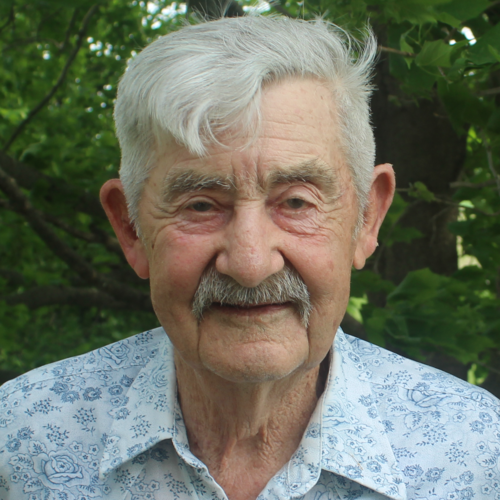 Allan Moyer was born in 1930 at home in Poweshiek County in Iowa. He was the middle child in a family of thirteen children. He grew up in the country and moved to Grinnell in 1944. He graduated from high school in 1948 and worked at Central Market cutting meat until he joined the Navy in 1951. In 1958, he married Pat Thigh, and they raised three children. His wife Pat passed away in 1973. Three years later, he met and married Shirley Selle in 1976. For a short time, he worked at Donaldson’s in Grinnell, but he’s farmed the majority of his life before retiring in 2016.