Barns of the Midwest: An Homage to Our Agricultural Past

As a Midwest native, I’m accustomed to passing abandoned farms and farmhouses nearly every day. However, aside from noting their beauty in the fleeting moment in which these farms are within eyesight, I’ve rarely—if ever—given them a second thought. Here, in the form of a video narrative, I’ve attempted to pay tribute to the decay of these delicate, lonely structures.

While gathering footage around my home in rural Wisconsin for this video, I paused at each shooting location to record audio samples. For instance, I captured the noise a rusty hook makes as it rattles against the side of a barn. I knocked one fist against a half rotted door. I held my phone up to the sky to record the buzzing of cicadas in a nearby tree. After returning home, I composed and recorded a song, titled “Prairie Lullaby,” incorporating these compiled noises.

As you can see in the last few seconds of the video, I used GarageBand to cut and splice my collected sounds to create beats that replicate drums. Subsequently, I added a couple of instrumental tracks over top in which I play simple melodies on the piano and the organ. A handful of sounds (specifically, the woodpecker noises and the wind whistling through grass) come from Freesound , a collaborative sound database. I’ve included the audio as a separate file in case the voiceover of the video is distracts from these subtler elements.

As the National Barn Alliance professes, “A barn is more than wood and nails.” I hope you come to share a similar impression after watching my video. 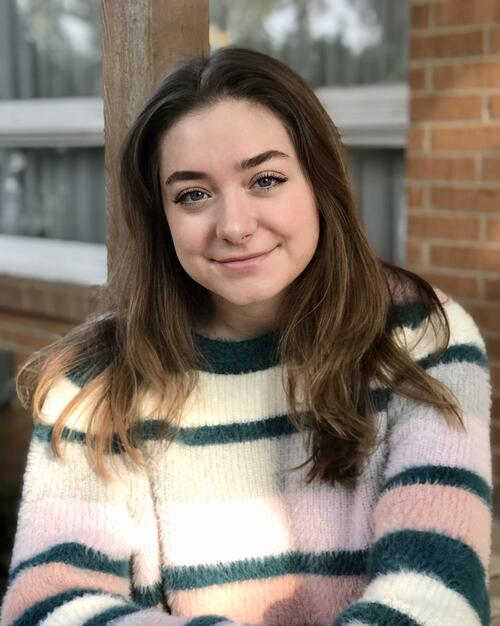 McKenna Doherty is a third-year student at Grinnell College majoring in English and Studio Art. Born in Red Lodge, Montana but raised in Monona, Wisconsin, McKenna feels proud to call the Midwest home and considers cheese to be one of her favorite foods. While on campus in Grinnell, she actively participates in the unicycling and juggling club, writes a weekly column for The Scarlet & Black newspaper, and serves as co-president of the Wisconsin Club. Currently, McKenna works in the Grinnell Math Lab as a (remote) calculus tutor. In her spare time, McKenna enjoys crafting, illustrating, playing racquetball, and dreaming of one day owning a cat named Cardboard. At present, she is co-authoring a novel with her best friend inspired by their time at Grinnell and loosely based on Train’s hit song, “Hey, Soul Sister.”