Spanning over a dozen states and provinces, the prairie has succeeded in lodging itself in the hearts of North American poets for centuries. A myriad of plant and animal species make their home in this ecosystem, alongside millions of humans living in cities, rural communities, reservations, and small towns. To this day, writers remain enamored with this emblematic biome for its natural beauty, abundant life, rich history, and diverse population. I created the Interactive Prairie Poetry Module as a small collection of prairie poems, including eighteen works by nine authors.

The game is also a collage-style writing tool which asks you to navigate the prairie by clicking the left and right arrows at the bottom of the screen. You can read about each area of the prairie and click on bolded text to view poems, and you can also hover the cursor over the text to find hidden glowing lines, then click them to collect poetry. At the end of the game, you can use the lines you’ve collected to piece together your own prairie poem. When you’re done, be sure to save your poem by taking a screenshot or copy-and-pasting it into a separate document.

The program I used to create the Interactive Prairie Poetry Module is called Twine . Twine is a free, open source tool which uses HTML to craft interactive and nonlinear stories in the form of web pages. Learning Twine is easy and requires very little computer science knowledge; anyone can teach themselves the basics with “A Quick Twine (2.2+) Tutorial” by Allison Parrish . When I began this project, I wasn’t sure what shape it would take. I knew I wanted to make poems into an interactive experience, and I knew the basics of what Twine could do. Many of my ideas for the module came later when I read through the complete SugarCube v2 Documentation , which lists everything you can do with SugarCube, the free Twine story format I used. As the module became more complex and I found myself wanting to add more and more to it, I ended up teaching myself a fair bit of HTML and Cascading Style Sheets (CSS) with the help of free online tutorials from websites like W3Schools and open community forums like Stack Overflow .

Over the course of this term, working on the module and reading great swaths of prairie-themed poetry, I came to appreciate the community and commonality that the prairie represents. I chose the poems featured in this game based on their blatant admiration and unabashed honesty regarding this place’s simple virtues and imperfect complexities. These poems and our beloved prairie remind us to find elegance in the simple, the common, the small, and the quiet. They emphasize the connections between people, animals, plants, and the earth as blessings to be celebrated. They capture the smallest moments of beauty, mere murmurs of delicate truth in the tall grass, and hold them under the bright prairie sky for all to see.

Edgar Lee Masters (1868-1950) was an American attorney, poet, biographer, and dramatist. His most well-known work, Spoon River Anthology (1915), is a collection of short poems narrating the epitaphs of the residents of Spoon River, a fictional town named after the Spoon River near his hometown of Lewistown, Illinois. His poetry illustrates rural and small-town American life as it explores themes of community and grief. Photo originally published in Tendencies in Modern American Poetry by Amy Lowell, Boston: Houghton Mifflin, 1921, accessed via Archive.org.

Virna Sheard (1862-1943) was a poet and novelist from Toronto, Ontario. She wrote her first books for her sons, then went on to author several romance novels and five volumes of poetry. Her poems deal largely with religious themes. Photo originally published in The Book Buyer, Charles Scribner’s Sons, 1903, accessed via Wikimedia Commons user Penny Richards.

Walt Whitman (1819-1892) was a writer from Brooklyn, New York. He left formal schooling at age eleven to work, eventually going on to inhabit several roles, including journalist, teacher, and government clerk. He published the first edition of his poetry collection, Leaves of Grass, in 1855 with his own money. The poems are an American epic, hailing the virtues of democracy and the wonders of nature. Photo by Alexander Gardner, accessed via the Walt Whitman Archive .

William Carlos Williams (1883-1963) was a Puerto Rican-American writer and physician born in Rutherford, New Jersey. Inspired in part by the Walt Whitman’s free verse, Williams was known as an innovating poet who wrote on America with great honesty and empathy. Photo courtesy of the Beinecke Rare Book and Manuscript Library, Yale University .

Emily Dickinson (1830-1886) was an American poet from a prominent family in Amherst, Massachusetts. She wrote over 1,800 poems exploring themes of art, death, nature, and spirituality, though only a handful were published during her lifetime. She loved baking, gardening, and taking walks with her Newfoundland dog, Carlo. Photo courtesy of the Todd-Bingham Picture Collection and Family Papers, Yale University Manuscripts & Archives Digital Images Database, Yale University via Wikimedia Commons user Deerstop.

Frances Ellen Watkins Harper (1825-1911) was an American writer as well as abolitionist, suffragist, and teacher. She was born in Baltimore, Maryland, which was then a slave state, to free parents. She went on to become one of the first African American women to be published in the United States. Her novels and poems deal with social issues including women’s education and the abolition of slavery. Photo courtesy of the Schomburg Center for Research in Black Culture, Jean Blackwell Hutson Research and Reference Division, The New York Public Library .

John Milton Hay (1838-1905) was an American author and politician born in Salem, Indiana. Aside from being the Secretary of State under Presidents William McKinley and Theodore Roosevelt, he also served earlier as private secretary to Abraham Lincoln and eventually co-authored an influential biography on him. Photo originally published in Encyclopedia Britannica, v. 14, 1920, accessed via Wikimedia Commons user Bob Burkhardt.

Emily Pauline Johnson (1861-1913), also known by her Mohawk stage name Tekahionwake, was a Canadian writer and performer born in Six Nations, Ontario. Her works celebrated her mixed-race heritage — her father was a Mohawk chief and her mother was an English immigrant — drawing from both Indigenous and English influences. She enjoyed canoeing, being on stage, criticizing the government, and fighting for social change. Photo courtesy of Library and Archives Canada .

Sarah Licht is a third-year Grinnell student majoring in English and Psychology, a writer of poems and short stories, and an avid dreamer and gamer. A Florida-native, she would much rather avoid the sunshine altogether and curl up with a good book. When she isn’t writing, she can be found getting another cup of coffee, watching bad movies, or playing with her cat Lilith. In the future, she hopes to publish her own poetry collection and, even more hopefully, several novels. Photo courtesy of Sarah Licht. 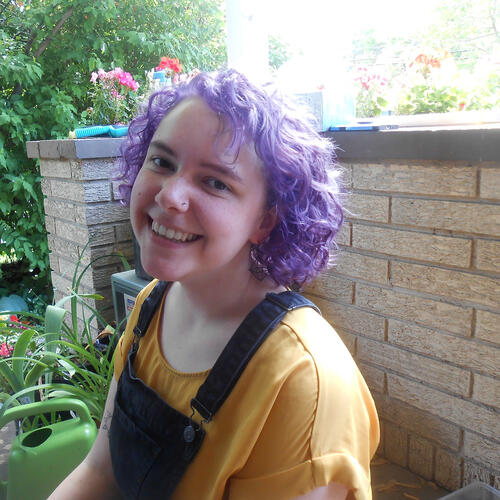 Oona Miller is a Class of ‘21 Grinnellian finishing up her English major and Technology Studies concentration. Hailing from Madison, Wisconsin, Oona has enjoyed storytelling since she was a kid. Aside from writing and coding, she delights in drawing characters, making up languages, unionizing student workers, and consuming audiobooks for power. Oona’s short stories and plays have received awards from the UW-Whitewater Creative Writing Festival and Grinnell College’s McClenon Clark Playwriting Contest. In 2018, Grinnell College Press published her first book of poetry, [How to Draw a God](BROKEN LINK). At any given time, she is working on at least three novels.