From Bhutan to Omaha: Refugees Put Down New Roots

During the early 1990s, more than 100,000 Bhutanese refugees of Nepali descent living in southern Bhutan were deported and wound up in refugee camps in eastern Nepal. The 1980s Bhutanese campaign, “One nation, one people,” allowed the ruling Drukpas to culturally homogenize the country by forcing out the Lhotshampas (southerners) with a different ethnic and religious background. Many of these displaced people spent over two decades at the refugee camps waiting to either be welcomed home or resettled in a third country. While opportunities for resettlement are often hard to come by, 85 percent of the resettled refugees are now in the United States.

However, even after being resettled, their problems have been far from over. Navigating daily life in a completely different corner of the world, often without English language skills and little-to-no personal connections, has required them to rely heavily on resources provided by federal and community organizations. Lutheran Family Services (LFS) in Nebraska (headquartered in Omaha) has been one such organization. LFS has been actively involved in refugee employment support, ESL education, and caseworker matching, among other services.

“Global Roots” is one of LFS’s latest projects that provides plots for gardens which refugees can use to grow food to feed their families and to sell at farmer’s markets. Kalpana Rasaily, the interpreter for the Bhutanese-Nepali Global Roots group, says that she first learned about the program through her internship at LFS. Rasaily, who is an involved leader at her local church, relayed the message to other Bhutanese Nepali churchgoers who expressed great interest. Currently, among the 41 refugee farmers, eight of them are Bhutanese-Nepali folks who are actively farming at the garden.

Cait Caughey is the program director at Global Roots. She describes one of her fondest moments while working in this brand-new refugee agriculture program that started this past January., “I am a big seed-nerd,” she says. “The most exciting time for me was when we were growing out plants in our green house. When everyone showed up with their giant boxes of seeds, I was crying!” The refugee farmers, most of whom were working in a greenhouse for the first time, brought a variety of seeds, everything from ethnic chili peppers to mustard and okra. Little did they know they were also sowing the seeds of a community for new Americans, rooted in collaboration and support for one another.

When asked about the changes in her life after coming to the US, Kalpana Rasaily says, “Life in the refugee camp was hard. We lived in tiny huts without basic amenities, which to say the least was drastically different from my life now. But we have other challenges in the U.S.” She says that in the camps she was well acquainted with her neighbors and was always socializing, while here, the American lifestyle can be isolating.

Of course most of us stick together with people from our own country. But we also get to meet other refugees, you know, become acquainted with our neighbors with similar stories. It gives us a sense of solidarity…

“Some of the refugees without jobs spend the whole day indoors because, well, we don’t know a lot of people,” she says. And yet, others who are working, like herself, are always busy with conflicting schedules. The Global Roots program has given them a platform to come together and to work on something as a community. The farmers usually go to the garden in groups. They plant seeds, dig out weeds, and check up on their plants to water them. Rasaily adds, “Of course, most of us stick together with people from our own country. But we also get to meet other refugees, you know, become acquainted with our neighbors with similar stories. It gives us a sense of solidarity.”

The farmers also connect with one another over their shared experiences of farming back home. Rasaily grew up watching her family and friends farm on the little plots of land they had around their houses. They composted food scraps and yard waste to make organic fertilizers and fetched water in pails from the river for their plants. She says that it is hard to farm in the same way here. “You have to ask for permission with authorities and gain a permit to even do a little bit of digging around your house. They ask a lot of questions. It’s just a whole mess.” So, for the refugees, access to land and tools to use their skills is what has proven to be the most important aspect of the project.

Even Caughey, who has been farming for eight years, says that she is always learning from them. “Intercropping and interplanting are just such amazing skills that folks have that I can’t even necessarily describe it. They know how to maximize space. They have introduced me to new hand tools that are so much easier for me to use as a woman in farming.” She emphasizes, “It’s not about teaching them how to farm. Their farming is a very intuitive, intergenerational practice that can’t be taught by an extension service. It’s about giving them land, equipment, and support so they can get back into farming.”

Although the pandemic has led the project in a different direction than the one Caughey had imagined when she stepped into her role at the beginning of January, she has shifted its focus accordingly into what she thinks is most important for this season: ensuring access to food for the farmers and their families. With so many people getting laid off from their jobs, Caughey says that they did not develop a market this year because their first priority was to get the food from the farm to their table. She beams as she says, “It was just so amazing to see giant totes and literal garbage bags full of produce that were being pulled from the farm and hauled onto their trucks.” The farmers do not have to go to the grocery stores as often; they can easily cook up a few meals per week from the farm’s produce. This, Rasaily claims, has been a blessing as they try to reduce contact with other people due to COVID.

But even through this hurdle, they persist. With their masks and gloves, six feet apart, the farmers continue to harvest their produce. As summer comes to an end, they are clearing out their plots, sowing cover crops and putting the soil to rest with a hope symbolic of what holds the world together today: the hope for a better season to come.

Cait Caughey is a farmer and an agricultural educator. She grew up in Omaha, Nebraska, where she attended college. During her time there, she volunteered at community gardens and was involved in anti-oppression organizing around climate change. Later, her travels outside the U.S., where she was able to study localized food culture and witness women’s role as food producers, inspired her to pursue a career as a farmer. Previously, she worked as the education director at The Big Garden, a non-profit in Omaha focused on school gardening. She now lives in Southwest Iowa, with her partner and two kids, where she runs Mullein Hill Farm, a regenerative small-scale farming operation. In Omaha, she works at Lutheran Family Services as the program director of Global Roots project.

Kalpana Rasaily moved to the U.S. from Nepal six-and-a-half years ago and currently resides in Omaha, Nebraska, with her family. She is a recent graduate of the University of Nebraska (Omaha) and is working as a nurse aide at Omaha Public Schools. She serves as a leader and an interpreter for her Bhutanese-Nepal community at her local church. At the Global Roots project, she works closely with the program director to ease communication and deliver concerns from the farmers. 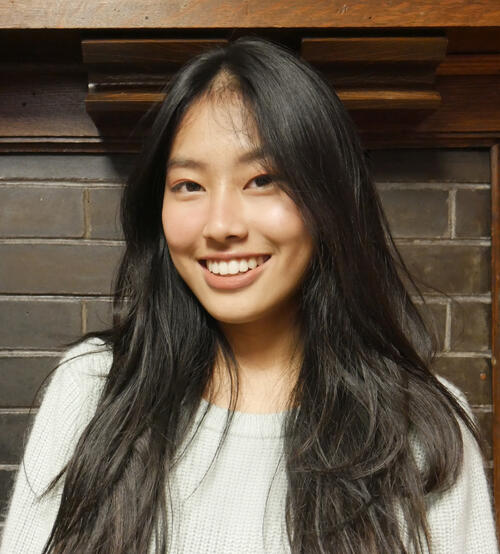 Tenzing Sherpa is a third-year student at Grinnell College majoring in biological chemistry and concentrating in neuroscience. She grew up in Nepal and holds Nepali food and cooking dear to her heart. She loves painting and is currently volunteering with Grinnell College Museum of Art to hold virtual art sessions for children in town.